Let’s not fool ourselves, London is a city full of clichés: from its red telephone booths to its black taxis, through Big Ben, Buckingham Palace, or the Tower of London. I’m not lying to you either: it’s these and not others that have made me return to the UK capital again and again: climbing to the top of the London Eye. Visiting the National Gallery. Or relaxing in Hyde Park is and will continue to be some of the places where you will find me in London.

But the truth is that when for whatever reason. I decided to get off the beaten path and explore new routes. I choose these 6 places to visit in London. Without bordering on the cliché, give me equal or more satisfaction.

Six off the beaten track places to visit in London

Then we leave you with an alternative guide to the British capital that includes our 6 things to visit in London off the beaten path: a review of the best of the best that does not appear in any travel guide. Let’s start!

The ruins of Saint Dunstan-in-the-East 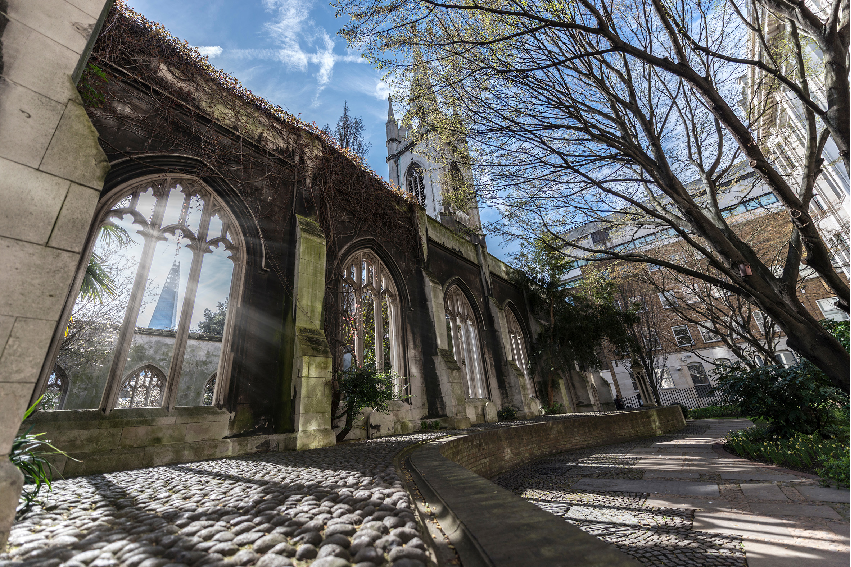 It seems incredible that in the heart of the City. A few meters from the Tower of London and Saint Paul’s Cathedral. There is a place as magical and at the same time unknown as the Church of Saint Dunstan-in-the-East. Built in the 12th century as a small Anglican church. It suffered like no one else from the bombings of Nazi Germany during World War II and ended up in ruins. With an appearance reminiscent of the Carmo Convent in Lisbon or the ruined abbeys of Edinburgh. The Anglican Church of England decided not to rebuild it. And that it serves as a testimony of the war. Converting it into a beautiful public park and planting numerous trees. To our luck, today we can visit this oasis of peace and harmony (it is usually quite quiet). A few meters from the hustle and bustle of London life. Do not miss one of my favorite places to visit in London!

I doubt very much that back in the early 19th century when the Regent’s Canal was built. It was thought that it would become such a pleasant and beautiful space for Londoners and tourists. In essence, it is a canal over 14 kilometers long that runs through the entire north of London. From Paddington to Docklands passing through Regent’s Park and Primrose Hill. With a charming and picturesque route that attracts more and more people, more tourists and is somewhat reminiscent of the canals of Bruges or Amsterdam. Its final point is nicknamed Little Venice. Leaves little room for doubt: a landscape that with its wooded areas, its architecture. And its little boats make you plunge into the depths of the “queen of the Adriatic”.

The same or even more picturesque than the previous one is Neal’s Yard. A beautiful square in the center of London (specifically between Neal Street, Shorts Gardens, and Monmouth Street) that if it weren’t for its small size, would be a worthy contestant for the star of the city. As soon as you arrive at it, you will be surprised by the explosion of colors of its buildings. And the state of care in which everything is. On the ground floor, you will come across multiple shops where that sell a multitude of artisan products.

At the top of the Fenchurch Tower 20, nicknamed the Walkie Talkie due to its strange appearance, is the Sky Garden, a viewing platform over 160 meters high that has fantastic views of the city, including views of The Shard, the Tower of London or the London Eye. The main difference between this and other observatories in the city is the Sky Garden. As its name suggests, also houses a beautiful garden divided into three terraces. Each with species from a different climate zone. If its views and green areas weren’t enough, its restaurant is a fantastic option for a drink – we recommend having breakfast there. The best of all? It’s free – though you’ll need to get tickets as it fills up pretty quickly.

Between the neighborhoods of Hackney and Cambridge Heath, in northeast London, is the traditional  Columbia Road Flower Market, a small flower market that you can visit every Sunday morning (it is open from 08:00 to 15:00). ). The truth is that it has progressively incorporated new shops and businesses (small art galleries, vintage clothing stores, pastry shops, bakeries), at the same time that more tourists discover this small floral enclave. A visit that never fails.

To the north of central London and once you cross the Regent’s Canal you will reach Primrose Hill, a green mound that from its central point allows you to get an enviable view of London’s skyscrapers. It is an oasis of peace and tranquility that allows you to getaway. Even for a few hours, from the bustle of London. We recommend that if the weather is good (something that does not usually happen) you buy something to eat in a supermarket and have it picnic-style while you can see the city’s skyline. If you don’t want to linger too long, you can always take a route along the Regent’s Canal or go to Camden Town, which is quite close.

You may also be interested in How To Store Bikes Outside?